Mikhail Alekdseevich Lavrentev[1] was born in Kazan on the 19 th of November 1900 into family of a professor of the Kazan University . His father himself had rather unusual biography. He had been born in France, into a French family, but in a very young age was adopted by a rich Russian nobleman (presumably for being an orfan). Lavrentev, the adopted father, brought the boy to his home town Kazan where he was named Aleksey Lavrentev and was looked after mainly by a German governess. As the boy displayed brilliant abilities the adopted parents gave him perfect education and subsequently he grew up to university professor. 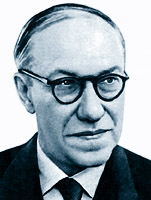 Soon after his son Mikhail's birth the father went for a work to Goettingen ( Germany ) where he remained almost until the World War I. Living in Germany Lavrentev the younger quite forgot Russian language and for that reason couldn't enter the grammar school on their return to Kazan . However he first studied at some professional school (of lower grade) but later also demonstrated unusual talents and successfully graduated from the Kazan University, in 1922[2]. In the following years he belonged to the “Scientific School of academician N.N. Luzin”[3] most powerful regular mathematical seminar which formed and guided the core of the Moscow mathematical school in the 1920-1940-s. Future most prominent mathematicians P.S. Alexanderov, N.K. Bari, L.V. Keldysh, A.N. Kolmogorov, L.A. Lyusternik, D.E. Menshov, P.S. Novikov, etc. all were members of “the Luzin's school”.

In 1931-1939 M.A. Lavrentev was teaching at the Moscow State University . In 1934 till 1939 he also was working at the academic “V.A. Steklov Mathematical Institute[4]”, which was transferred from Leningrad –its place of origin- to Moscow in 1934. In the same 1934 he received scientific degree “doctor of technical sciences” and in the next 1935 was awarded a doctorate in physics and mathematics.

In the 1930-1940-s mathematical works of M.A. Lavrentyev were related to the theory of functions development. Working together with M.V. Keldysh he studied problems of Dirichlet, Neumann, Carleman and also suggested his own approach to theory of conformal mappings , he also proved theorem of solvability of Navier-Stokes equations in hydro-mechanics . A report on the fundamentals of quasi-conformal mappings theory was made at the Third All-Union Mathematical Congress in 1956. Monographs by M.A. Lavrentev “Methods of the Complex Variable Functions Theory” (B.V. Shabat et al.) and “Fundamentals of Calculus of Variations” (L.A. Lyusternik at al.) have been published several times and became classical work for this mathematic domain.

From the very beginning of the work on electronic digital computers M.A. Lavrentev took big interest in them. According to information presented by B.N. Malinovskiy in his “History of Computer Engineering in Persons” and some other evidences, it was likely that M.A. Lavrentev's suggestion to begin designing of (the first) digital computer (MESM) became the decisive one for academician S.A. Lebedev. The latter had already developed necessary theoretical fundamentals of the computer design and, as a scientist, was ready to start practical work. That opinion also was shared by academician V.M. Glushkov, by S.G. Krein (who composed the first testing program for MESM) and by academician O.A. Bogomolets (president of the AS Ukraine), who provided necessary conditions for that.

M.A. Lavrentev took active part in scientific seminar on MESM design which was established by S.A. Lebedev (in Kiev ) in 1948. Leading mathematicians of Kiev academician B.V. Gnedenko, A.Y. Ishlinskiy, A.A. Kharkevich also participated. At the end of 1951 M.A. Lavrentev was a member of the AS USSR commission, headed by M.V. Keldysh, which was in charge of the MESM testing and adopting of its official operation.

In 1949 M .A. Lavrentev was worried with slow general progress of computer development and production in the USSR . Therefore he addressed a detailed report directly to I.V. Stalin especially emphasising urgency of computer implementation for scientific researches. The result of his correspondence was rather unexpected, in the beginning of 1950 he was summoned to Moscow and appointed a director of the academic Institute of Precision Mechanics and Computer Engineering. Thereupon he was put in charge of creation of the (quick) electronic calculating computer BESM, what he should organise from the very beginning. Being well acquainted with S . A . Lebedev, who was still residing in Kiev completing his MESM, and having respect to both his scientific and human merits Lavrentev immediately invited him for that new work. Thus S.A. Lebedev returned to Moscow[6] where he became a head of computer laboratory at Lavrentev's institute.

At the same time more computers were in progress. According to governmental directive, which determined schedule of design of the USSR two next electronic computers M.A. Lavrentev was nominated a responsible head of the BESM project and S.A. Lebedev was its chief designer. The other computer “Strela” was produced by the ministry of instrumentation and machine engineering. The ministry in its turn appointed A.A. Lesechko as the project head and Y.Y. Basilevskiy as the chief designer.

2. The history of Lavrentev's early years is described in the book - “Computer History in Persons” by B.N. Malinovskiy (Kiev, KIT, 1994).

6. S.A. Lebedev received appointment in Kiev in 1946 together with several other academicians of Moscow . It was the USSR governmental program of restoration Ukrainian industry and science destructed by the war.