Vladimir Konstantinovich Levin was born on the 5 th of March 1929 in Moscow, into teachers' family. He had studied at school only seven years (1937-1944) instead of ten, since he passed exams for the whole secondary part in advance. In the same 1944 Levin entered the Moscow Power Engineering Institute – famous technical university that “produced” most of famous soviet computer designers and inventors of the first post-war generation. There he studied at the faculty of automatics and, in 1950, received qualification of graduate-engineer in physics. 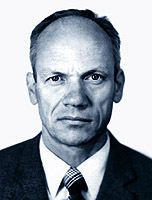 In 1951 he received position at Design Bureau of Industrial Automatics (DBIA) that was subjected to the USSR Ministry of Radio Producing Industry. There he was working under supervision of Vladimir Stepanovich Polin until 1968.

In 1955 Levin submitted dissertation thesis and received degree, “Candidate of technical sciences[1]”. In 1960 he was promoted to the DBIA chief engineer. Then the Ministry performed functions of the government head organization in charge of electronic computer research, design and production. Polin (1908-1975) himself was a director of DBIA. He had been awarded degree “Candidate of Physical and Mathematical Sciences” and belonged to the pioneers of soviet digital computing. His design-bureau concentrated creative efforts on special computers for defence purposes. From 1950 till 1960 they were producing devices with electron tubes, later turned to semiconductor components. Polin and his colleagues permanently maintained partnership with leading scientific computer centres headed by S.A. Lebedev and B.I.Rameev.

In 1951-1958 Levin took part in designing of special computers with high performance. They were provided with combined electron tube–semiconductor circuitry, with clock-rate of 1.5 MGz - a record for that time. In 1958-1965 he was deputy of chief designer for next project - semiconductor computer “Vesna” (the Spring). It was so-called general purpose machine, with high performance. The next computer “Sneg” (snow) was an abridged variant of “Vesna”. Levin was designing it, as well as some special circuits based on the same components, when he had already became the chief designer.

In 1966-1967 Levin headed pilot project for a new system called “Ryad” (the row), which in 1968 received the famous title, “Unified series of compatible computers” or simply “ES computers[2]”. With successful completion of the project, in the same 1968, Levin was appointed a vice director on scientific work at the newly established Scientific Research Institute for Digital Electronic Computers (SRIDEC), where he arrived together with a group of his colleagues form DBIA. That time the international ES-computer program[3] was already in full progress. At the SRIDEC Levin, as the first deputy of ES computers chief designer, was in charge of high-performance systems, development of operating system software, management of international designing team co-operation and communications. He was responsible for implementation of ES computers in automated management and control systems, and also in information service supported by remote data processing systems (http://www.computer-museum.ru/hisussr/es_levin.htm).

In 1974 Levin received his doctorate and in 1976 was promoted to director of DBIA (which had already became an institute) where he remained until 1995. In 1978 DBIA received new name “Quant”. Since 1996 he has been performing scientific chief functions of the Scientific Research Institute “Quant”. As a scientist Levin is also famous for design of three problem-oriented systems with large-scale structural parallel performance.

In 1987 Levin was elected a corresponding member of the USSR Academy of Sciences. During his work in 1993-1995 he also designed scaling multi-processor computation system MVS-100. Basic components for these systems were transputer cards and microprocessors Intel-860. In 1996-1999 Levin designed new computation system MVS-1000 based on microprocessors Alpha DEC. Its performance rose up to 0.1 TFLOPS (1999) and his latest system MVS-10000 reached 1 TFLOPS (2001). These computers were built in telecommunication systems. Those works were performed in co-operation with some institutes of the Russian Academy of Sciences (RAS). Since then they have been being conducted without interruption (www.jscc.ru). In 2003 Levin was elected a full member of RAS.

Since 1957 V.K. Levin has been teaching at a university, what is rather typical for leading Soviet/Russian computer scientists. In 1977 he obtained there a professorship.

2.In GDR – one of the project initiators and very active participant, it was named - ESER ( Einheitliche System Elektronischer Rechenmaschinen ).

3. joint program of common research, design and production of new extendable unified computer series, compatible on programming level with IBM-360 system. ES-computers were successfully produced from 1970 till 1990 by a team of specialists from all socialist countries - members of the Council for Mutual Economic Assistance. See also “ЕС ЭВМ” in the “Museum”- (www.computer-museum.ru)