Nikolay Yakovlevich Matyukhin one of the Soviet computer pioneers was born on the 8 th of Febpuary 1927. 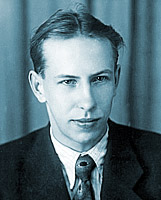 Creation of the first two Soviet computers was completed in December 1951. Those were MESM produced by Sergey A. Lebedev in Kiev and M-1 in Moscow at the Power Research Institute AS USSR. Its design and assembly were performed at the laboratory of Electrical Systems by the team of young engineers headed by academician Isaak S. Bruk. Nicolay Matyukhin, then a graduate of Radio-engineering faculty at Moscow Power-Engineering Institute (MPEI), was a chief in charge of all practical works.

Remarkable fact in history of the Soviet computers consisted in independent development of practically similar “classical” architecture of digital computing machine performed by the both – MESM and M-1 - teams. Both groups knew nothing about each other's activity. Neither they obtained any information about American progress, since all works were performed in atmosphere of secrecy those times. Computer architecture identical to what is usually called “von Neumann architecture” was developed by Bruk and Matyuchin simultaneously with Lebedev. The name itself, “Automatic digital computing machine”, given by Bruk's team in the report on M-1 was an evidence of their awareness of the work's principal importance. In M-1 Matykhin realized some principle technical solutions on logic and networking of the first generation computers. Later they plaid a significant role in the Soviet computer development; those were two-address command system (instead of the accustomed three-address one), semiconductor based logical structures of computer arithmetic and control networks, common oscilloscope cathode ray tubes usage as memory units and implementation of common teletype as input-output device.

Being Bruk's brilliant pupil Matyukhin subsequently headed development of the next computer M-3, that represented Bruk's concepts of small computers aimed at purely scientific and engineering purposes. M-3 was completed in 1956 by joint efforts of Matykhin's team and the group of B.M. Kagan of All-Union institute of Electronic Machinery . It became the prototype for the famous Belorussian computer series ”Minsk”, first Armenian computers “Razdan” and “Aragats”, for the first Hungarian computers and was also assembled in China. In the following years Matyukhin, as a chief designer at the Institute of Automatic Instrumentation –IAI (Ministry of Radio), created computer of the second generation “Tetiva” and “Iset'” that already belonged to the third one. Both were basic machines developed for maintaining antiaircraft and anti-rocket defense complexes, that were analogue to the American global “Sage” system.

Matyukhin also founded his own scientific school of computation systems design at the IAI, which inherited numerous characteristic features of I. S. Bruk's school. Advanced technical solutions in design of multi-module multi-machine computing complexes of higher “survival ability”, that had common “field” of external memory and other peripheral devices connected by communication channels were distinguishing characteristics of his school. He was also among the first Soviet designers who implemented in practices the principle of separating data memory from the programming memory and thus increased reliability of the system. The microprogramming control was developed and introduced by Matyukhin independently from that of Morris Wilkes of the Great Britain . Both his stationary and mobile computing complexes were implemented as basic equipment in data commutation centres of the global rocket defence network of the USSR . They remained in serial production from 1965 till 1992. It was his daring decision to introduce the architecture of the unified ES machines for mobile and on-board computers, thus replacing the traditional numerous special machines.

Matyukhin is also famous as one of the founders of the national scientific school of automatic design of computers and computation systems. He was the author of the first software complex as well as the chief editor of the first publication that joined logical modelling of digital devices with their automatic design and working out their manuals and other documentary.

Nikolay Matyukhin also coordinated cooperation of various national defense ministries and headed all-union conferences and seminars on automatisation of design. In 1976 he was awarded the USSR State Premium ( the highest one ) for his researches in the field of the systems of control. In 1979 he was elected as a corresponding member of the USSR Academy of Sciences (department of mechanics and processes of control), for his contribution as an outstanding specialist in computer engineering as well as being one of its founders.

The character of this outstanding scientist's life was chiefly determined by features of his own nature, radiant talents of engineer and scientist, his desire and ability of creative leading of collaborators and colleagues everywhere he used to work.

In 1950 he successfully graduated from MPEI, where he demonstrated unusual talents at researching and inventions of radio transmitting devices. However the institute administration rejected his application to a postgraduate study on the grounds of his being “the son of the soviet people enemy”. Thus, with a piece of “good in bad” luck he received a position at the prof. Isaak Bruk's computer laboratory. 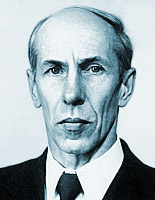 Nikolay Yakovlevich had many friends. All his relatives and colleagues loved him for his kind and modest nature and very attentive attitude. He spent his young years in hunger and needs of war times and in post-war poor student living and could also understand other people's needs. Once, when he was already in Bruk's team, he couldn't even come to the laboratory for want of winter clothes, and the weather was very cold. The situation was saved by Bruk himself, who just gave him his own coat, to “return when you become rich”. He was very emotional and had ability to inspire and fascinate with his ideas, no matter if scientific or some vocational traveling plan.

Detailed biography of Matyukhin is given in the book by B.N. Malinovski “History of Computers in Personalities”. There, one can find line from a poem (by E. Assadov ) that (in free translation) reads like, “There is no guidance for the pioneers and there is no for them historical role model…”. It's exactly for such people as Matyukhin.

Nikolay Matyukhin died 4.03.1984, when he was only 57 and was full of creative plans and ambitions. His name remains in the computer history forever.