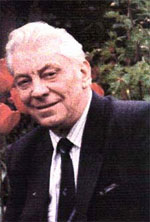 Vladimir Andreevich Melnikov was born on the 18 th of August 1928 in village Venyukovo near Moscow. In 1951 he graduated from the Moscow Power Engineering Institute - MPEI (technical university) with diploma of engineer on “Automatics and telemechanics”. Already before graduation he began work at the Institute of Precision Mechanics and Computer Engineering (IPMaCE) of the Academy of Sciences. Academician S.A. Lebedev, the leading computer pioneer and the institute director himself was his supervisor there.

That was the time when Lebedev was busy assembling BESM - his first digital electronic computer created in Moscow[1]. Lebedev always preferred to compose his creative team of young collaborators, supervised by few experienced scientists. From his experience he knew that their lack (or shortage) of practical knowledge was always fully compensated by their energy, inventiveness and natural tendency of finding solutions based on the most modern scientific and technological methods of the time. One could say that their “lack of experience” was always accompanied with “lack of prejudices” and “lack of conservatism”. For that reason young “pre-graduates” form MPEI, V.A. Melnikov, V.S. Burtsev, A.N. Zimarev, V.P. Smiryagin, A.G. Laut, V.N. Laut and A.S. Fedorov were entrusted rather responsible tasks which were simultaneously subjects of their diploma projects. Thus Melnikov had to devise a model of the computer central unit for operations control. The “sum” of all their projects composed the draft project of BESM adopted in April 1951.

Computer BESM had performance of 8-10 thousand arithmetic ops and was one of the quickest computers for that time. Unfortunately the shortage of proper electronic components (BESM vas a civil project, not top priority one) forced Lebedev's team to produce it in two stages. Thus its regular operation with memory based on mercury delay line devices began in 1953, which were replaced with the (project) potentialoscopes providing ifs full-speed operation only in 1956.

Melnikov grew to be fully experienced scientist first of all due to his “apprenticeship” at the scientific school of Lebedev . Melnikov kept the feeling of gratitude and respect to him till the last day of his life. Together with his friends, other Lebedev's students, he continued and developed its traditions after Lebedev's death.

Later Mel'nikov mentioned that he was very lucky “to have such first teacher”. “It was Lebedev who taught us haw to make digital electronic computers and it was academician M.A. Lavrentyev[2] who had managed to form the creative atmosphere at the institute which enabled successful research and design of our first computers and also of their serial, commercial production. Being still a young engineer Melnikov was entrusted the next IPMaCE project - computer BESM-2. He headed its operational testing, conducted adjustments and ran preparation work for its serial production. It was Melnikov who introduced number of standard solutions in architecture and circuitry thus making many its parts compatible with another computer M-20, which Lebedev designed and assembled in parallel with BESM-2. He introduced ferrite memory and replaced electron tube diodes with germanium ones. 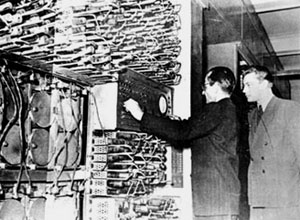 BESM-2 was put in commercial production in 1958. Melnikov, as designer in charge also headed organisation of its production in China.

One of the next machines - BESM-6 became recognised a masterpiece of S.A. Lebedev and also one of the world's best computers. Its average performance reached 1 million ops. Basic solutions for its architecture, circuitry, structure, components and also software belonged to S.A. Lebedev and his assistants V.A. Melnikov, L.N. Korolev, A.A. Sokolov.

Among those solutions there were:
- conveyor principle of its operational control which enabled simultaneous processing of 14 machine instructions (“water main” as Lebedev called it);
- implementation of the cache memory on quick registers for shortening of RAM access amount;
- RAM interleaving into autonomous blocks with possibility of their simultaneous addressing to;
- multi-program operation mode for simultaneous solving of several problems, with given priorities;
- page organisation of memory;
- hardwired transforming of mathematical addresses into physical ones for providing dynamical distribution of RAM during the process of computation by means of operating system;
- hardwired protection means for program memory and data memory;
- developed software interrupt system automatically transferring from solution of one problem to another one, also enabling addressing to peripheral devices and control over their operation.

Many of those solutions proved to be so progressive that later they were implemented in computer architectures of the third and fourth generations, in spite of the fact that originally they were based on electronic components of the second generation. 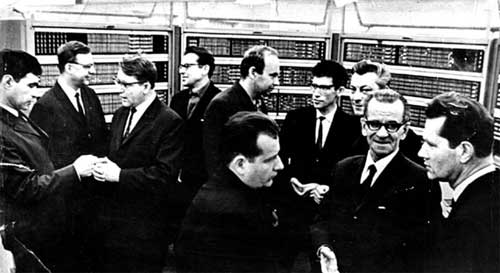 Designers of BESM-6 (V.A. Melnikov – the third from right)

BESM-6 was in testing operation since 1965. By the middle 1967 the first computer BESM-6 was examined and approved by the governmental commission headed by academician M.V. Keldysh – president of the USSR Academy of Sciences. Thereupon three more – already serial-computers were assembled at the Moscow computer plant SAM. Dynamic cooperation between the plant and the Melnikov's design team during development of BESM-6 made possible quick and efficient preparation of the computer for serial production without intermediate period of adjustments, re-testing, etc. Its advanced architecture enabled long operational life. BESM-6 remained in commercial production during 17 years without essential improvements and became one of the most favourite and wide spread Soviet high-performance computers of its time.

BESM-6 was intensively used for scientific computations in nuclear physics at the research centres in towns of Chelyabinsk, Moscow, Dubna (scientific partner of Swiss CERN), etc. It was basic machine for numerous computer centres with multiple access at various scientific institutions of the Academy of Sciences. Many large real time control systems as well as computation systems for remote data processing at space research centres implemented BESM-6. The computer was equally popular as software development tool.

Later its architecture was used in supercomputers ELBRUS based on integrated circuits (“Elbrus-1 K2” and “Elbrus-KB”, designed by M.V. Tyapkin) what made them compatible with BESM-6 on software level.

In 1969 Melnikov and his design team were awarded the “USSR State Premium”. In 1976 he was elected a corresponding member of the AS USSR, mathematical department (computation facilities).

When all works on BESM-6 were completed Melnikov began design of powerful computation complex AS-6. He shared leading role in this project with S.A. Lebedev and A.A. Sokolov. AS-6 became predecessor of the future super-computers[3]. AS-6 was coupled with BESM-6 for monitoring and control of the USSR-USA joined space flight “Soyus-Apollo” and in the following soviet space researches. Complex BESM-6 - AS-6 was subsequently improved and efficiently used at various space research centres.

His last 10 years Melnikov dedicated to creation of vector-conveyor super-computers based entirely on soviet electronic components. He formed a new team for super-computer design at one of the research institutes of the USSR Ministry for Electronic Industry.

In 1983 AS USSR founded new department for information sciences, computer engineering and automation. Melnikov established new institute within its administrative structure and became its director. It was the Institute of Cybernetics Problems . Although architecture of the computation system “Electronica-SS-BIS” produced by Melnikov resembled famous American computer “Cray” (from Cray Research) most of particular solutions on architecture, design, circuitry and software specific features of this vector-conveyor super-computer were original. Experts' opinion emphasised advantages of its architecture in general more rational and efficient than in “Cray”.

In 1986 Melnikov was elected to the USSR Academy of Sciences, department of mathematics (mathematics – applied mathematics). The fact itself, of his election, was an official recognition of his scientific contribution to development of applied mathematics and its connecting with information science and computer engineering.

The political events of the 1990-s and the following economic crisis interrupted his work on “Electronica-SS-BIS”.

A.V. Melnikov always kept most warm reminiscences of the times of his training, learning and collaboration with S.A. Lebedev and deep gratitude. He always stressed importance of work with younger generation of specialists and students. He himself took great care of teaching and held the chairs of computer engineering at the Moscow University for Physics and Engineering, Moscow University for Radio-engineering, electronics and automatics, Moscow State University . He paid much attention also for supporting of the school education in the field of information sciences and propagation of its achievements among young people. He made many efforts to support and develop work of scientific popular journal “Information science and education” where he was editing director. He was also chief editor of the scientific periodical (collection of works) “Cybernetics and computer engineering”.

V.A. Melnikov was a deputy of the academician–secretary at the academy department of information science, computer engineering and automation. He was elected to the Presidium of the Higher Expert Commission on scientific degrees and evaluation of dissertation theses.

Unfortunately his life was not long. V.A. Melnikov died on the 7 th of May 1993, at the age of 64. All his life he lived in Moscow and is buried there.

His 70 years jubilee was posthumously celebrated in Moscow with a representative scientific symposium in February of 1999.

His scientific merits were highly recognized. He was decorated a “Lenin Order”, two orders “Red Banner of Labour” and several medals. He was twice awarded “USSR State Premium” (1969, 1980) and S.A. Lebedev premium by the Presidium of AS Ukraine.

2. M.A. Lavrentyev was the IPMaCE director before Lebedev.