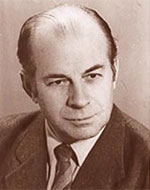 Vladislav Vasilyevich Rezanov – was the scientific head of the Scientific Research Institute of Control Machines (computers) since 1958 till 1995.

He also performed duties of the vice-director of the Scientific Industrial Corporation «Impuls» in town of Severodonetsk (South Ukraine).

Rezanov was born in 1929 in Starobelsk (industrial South of the Ukraine). He studied in Moscow and was one of the first graduates of the Moscow Power Engineering Institute who had -then new- speciality «Computer Engineering». At those years it was called «computing and solving machinery».

After graduation he received position at the computer plant in town of Penza (then famous computer development center, 600 km east from Moscow) and a little later at the Penza affiliate of the famous Moscow Special Design Bureau — 245, where they produced computers of popular family URAL (the Urals) developed by the affiliate's director, famous computer pioneer Bashir Iskanderowich Rameev.

In 1958 Rezanov moved to Severodonetsk where he worked in -town of- Lisichansk at the affiliate of the Institute of Automation belonging to the Ukrainian State Planning Commission. In 1964 the institute was transformed into «fully computer-oriented» Scientific-research Institute of Control Computers» SRICC (Russ. НИИ УВМ).

In 1965, when the institute was integrated into the USSR Ministry of Instrumentation structure, Rezanov proposed his fundamental principles of the Agregate System of Computing Machinery – ASCM (Russ. Агрегатная система средств вычислительной техники – АСВТ).

His system became one of the basic agregate complexes of the State System of Instrumentation and Means of automation. Development of the system, in its turn, became the core of scientific and technical strategy of the ministry.

At the institute Rezanov developed, and headed development of the models M-2000 and M-3000 ASCM, which were produced in series by Severodonetsk instrumentation plant and by Kiev plant CCM (Control Computing Machinery). M-3000 was implemented as the basis complex for all-Union aircraft ticket booking and selling system «Syrena» (the siren).

In 1968-76 V.V. Rezanov was the chief designer of the models M-6000, M-7000 ASCM-M family, which formed basis for more than 15 000 various automated systems of technological processes control.

In 1976-1990 he was appointed the deputy of the chief designer of the SM computer family (produced in cooperation with several East-European countries). Rezanov himself headed design team in computer projects SM-2, SM-2M, SM-1634, SM-1210, which replaced M-6000 and M-7000 and were produced in series by enterprises of the Scientific Industrial Corporation «Impuls» in Severodonetsk and by Industrial corporation «K.N. Rudnev plant of Control Computing Machinery in -town of- Orel».

In 1978-87 Rezanov headed design of high-performance computing complexes (PS-2000, PS-3000) with transformable structure ASCM-PS (Russ. АСВТ-ПС) intended for scientific researches in geophysics. The work was performed at the SRICC in collaboration with the Institute of Control Problems. From 1981 till 1989 «Impuls» produced more 150 complexes PS-2000 for research information processing at geologic exploration, and for special purpose hydroacoustic systems.

During his work-time Rezanov authored more than 100 publications and received significant number of patents. He was awarded scientific degree «Candidate of Technical Sciences».

In 1982 he received the honourable title «Distinguished Machine-builder of the Ukraine».
For his scientific activity Rezanov was decorated with the «Lenin Order» (1981) -the USSR highest civil order, with order «Red Banner of Labour» (1971), order «October Revolution» (1977) and with order «The Sign of Honour» (1966).

In 1995 V.V. Rezanov retired from the position of the «Impuls» vice director, and continued his work there as the «Chief scientific collaborator» of the re-structured «joint stock company Impuls».

Essays on history of Computer Science and Technology in Ukraine. Author Boris Malinovsky.