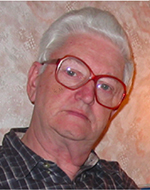 Gennady Ryabov, born 15.01.1936 in Moscow, is a famous scientist in the field of applied mathematics and electronic data processing systems, he was the chief designer of some computing systems for military and civil purposes. G.G. Ryabov is a professor with degree “Doctor of Technical Sciences”, he also bears honorable title “Distinguished Scientist of the Russian Federation” and -since 1984- is a corresponding member of the USSR Academy of Sciences (now Academy of Sciences of the Russian Federation - RAS).

Dr. G.G. Ryabov is a laureate of the “USSR State Premium” and the “S.A. Lebedev premium” of the USSR Academy of Sciences (AS USSR), he authored more than a hundred (published) scientific works.

In 1953, after graduation of the secondary school, he entered the faculty of physics and mathematics of the M.V. Lomonosov Moscow State University, the chair of the probability theory. He graduated from it in 1958 with (master's) degree in mathematics and received a position at the Institute of Precession Mechanics and Computer Engineering AS USSR (now: S.A.Lebedev IPMCE - ИТМиВТ им. С.А. Лебедева).

He worked there for almost 50 years, beginning his professional career as a “Junior scientific Collaborator”, then chief of laboratory, etc., up to the institute's director position (1984–2005).

From the 1958 till 1962 he was one of the leading designers of the computer controlled anti-missile rocket flight real time program, what was successfully completed in 1961 with the world's first interception of the (testing) ballistic missile in the air.

In 1963 he was one of the first to create mathematical foundations to be the basis of algorithms and programs development for automated computer aided design of computers.

That work also formed the basis of his own dissertation thesis, which was successfully defended and he was awarded degree (Ph.D.) “Candidate of physical and mathematical sciences” (1967).

For his contribution G. Ryabov was awarded (together with some collaborators - co-authors) the “USSR State Premium”), in 1974.

Intensive development of that subject led to creation of the systems which widely implemented interactive methods at the logical design phase; also the full sets of technical documentary were produced for the computer manufacturing enterprises as the result of that progress. Such approach fully proved its high value during development of computers BESM-6/ БЭСМ-6, ELBRUS-1/«Эльбрус-1», ELBRUS-2/«Эльбрус-2» and a number of nonstop computing control systems working in the real time scale.

In 1984 he summarized those works in his doctoral thesis “Scientific foundations of the high-performance electronic computers complex designing systems”. G.G. Ryabov successfully defended it and received the “Doctor of Technical sciences” degree. One should notice that the Russian “Doctor of Science” is the highest research degree in the country.

Like many other scientists having that degree Dr. G.G. Ryabov is also a professor. He was scientific supervisor of 16 “Candidate of Sciences” and 7 “Doctor of Science” dissertations defended by his students. Dr. G.G. Ryabow also held (basic) chair of electronic computing machinery at the Moscow University for Physics and Technology.

From 2005 G.G. Ryabov has been working at the scientific-research computer center of the M.V. Lomonosov Moscow State University as the chief of the computer visualization methods laboratory.

His scientific interests are focused on the problems of combinatorial topology, mathematical logics, theory of numbers and usage of the university's famous supercomputers “Lomonosov” and “Chebyshev” for their solution.

As a professor he delivers lectures on “Automatization of the radio and electronic devices design”, “Electronic computers design and setting of mathematical problems”. He prepared and introduced new special course “Introduction in computer methods of combinatorial-topological constructions”.

G.G. Ryabov's scientific contribution has been awarded with the “Lenin Order”, order “Red Banner of Labour” and number of medals.