Translated and edited by Alexander Nitusov.

T.M. Alexandridi is a pioneer of the Soviet/Russian electronic computer development. 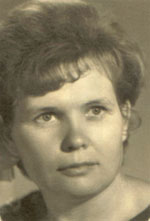 In 1950-1960s she was among the most active young designers of the first Soviet digital computers М-1 and М-2, which have been made and put into operation at the Power Institute of the USSR Academy of Sciences (PI AS USSR) under scientific supervision of academician I.S. Bruk

Tamara Alexandridi was born on the 26th of September 1924 in town of Tomsk (university centre in the West Siberia). In 1929 their family moved to Moscow. In the beginning of June 1941 she graduated from school (Nr. 585, Moscow), with the best results for the school year, and immediately entered the Radio faculty of the Moscow Power Engineering Institute (MPEI) – the biggest and the most modern technical university of the USSR at the time.

However, just few days later the war broke out (22.06.1941 – beginning of the Great Patriotic War-the USSR entered the WWII). She volunteered to army as a radio-master. She had received solid experience at radio because, during the senior school years, she was also an active member of the Moscow (technical) Radio-club, which was very popular in the 1930-1940s.

On the other hand Tamara was not even 17 and, officially, could not be enlisted to army (one should be older than 18), so she had to invent some story to be accepted.

Soon after she was sent to actions, Tamara Alexandridi -with her radio-set- participated in battles of Crimea, Stalingrad, also in Ukraine, Byelorussia, Poland and Germany itself. Three times she was saved from the death, or from getting to be a prisoner of war, only by miracle. In summer of 1943 she was unexpectedly summoned to Moscow (later she learned that it was done upon personal permission from I.V. Stalin) to be awarded with special portable radio-station “For the best Radio-master”. Tamara finished the war in Berlin, at the Reichstag building.

She was decorated with several orders and medals and, in July 1945, was demobilized and, in September, resumed learning at the MPEI.

In September 1950 Tamara Alexandridi was preparing her diploma project at the laboratory of Electrical Systems (“Electro-systems Lab.”) at the Power Institute of the USSR Academy of Sciences (AS USSR). Academician Isaak Semenovich Bruk was the scientific head of the laboratory.

In December 1948 I.S.Bruk and his young assistant Bashir Rameev received the USSR first Invention Certificate (then an analogue for a Western patent) for the electronic digital computer with common bus.

The Directive of the AS USSR Presidium on the beginning of the computer M-1 (ЦВМ М-1) development was issued in April 1950. I.S. Bruk formed a small project task force of the MPEI radio engineering faculty graduates and students making their diplomas. Graduate Nikolay Matyukhin -then 23- was the first one; he graduated in April 1950, received diploma with honours and was given position at the Bruk's laboratory.

Isaak Bruk told him about his basic ideas on design of the computer M-1 and then they together began designing of the computer structure and forming of technical solutions. According to its characteristics M-1 belonged to the small digital computers type. Such decision was determined by the limited financial and production possibilities of an academicals institute.

It was really a lucky chance for Bruk to get those young radio and electronics specialists. The need in them was enormous in the country, especially among the defense institutes and enterprises, and the MPEI Radio faculty was the leading one among -then- the few educational organizations of that profile.

However, Bruk himself, in spite of being very talented -almost genies- scientist, generally very friendly to his young collaborators, was also famous for his difficult nature. Thus, he refused to take any girls in his task forces, arguing that they would “just the same, get married soon and flee...”.

Tamara Alexandridi became an exception thank to her Greek surname, which (in Russian) has the same form both for the feminine and masculine genders. Reading the list of candidates Bruk simply did not think that “T.M. Alexandridi” could be a girl. When he met her the first time it was “too late”. Anyway, each young radio-specialist was really “worth of gold” for him in the most hard “competition” with powerful military organizations.

Tamara Alexandridi first should prepare her university diploma and Bruk charged her with development of memory device on electronic cathode-ray tubes for the diploma subject.

Distinguishing feature of her M-1 project solution was implementation of cathode-ray tubes 13LO-37 from a common oscilloscope instead of so-called potentialoscopes (storage tubes), which had been designed specially for memory devices of electronic computers but yet were too expensive and difficult to obtain. In March 1951 Tamara Alexandridi successfully defended her project and received diploma/qualification of “Radio-Engineer”.

By that time assembling of the computer was completed and it was being tested. In autumn it was tested with special programs and then was ready for operation.

The authoring team, which was listed on its title page and signed it, consisted of: the Power institute's director member of the AS USSR academician G.M. Krzhizhanovski, the head of the Laboratory of Electrical Systems corresponding member of the AS USSR I.S. Bruk, members of the engineering team junior scientific collaborators N.Y. Matyukhin, T.M. Alexandridi, A.B. Zalkind, M.A. Kartsev, and the technical assistants L.M. Zhurkin, Y.V. Rogachev, R.P. Shidlovski.

It's worth mentioning, that was the first scientific report on a digital electronic computer in the USSR. The M-1 was given into regular operation.

That was not mini but middle class computer with appropriate technical characteristics. A new team of designers was formed and young graduate Mikhail Kartsev headed it. Young engineers T.M. Alexandridi and Y.A. Lavrenjuk were also members of the team. They designed electrostatic memory device made of cathode ray tubes.

It was a parallel device, according to its functional principle. It consisted of 34 cathode ray tubes (13LO37), what corresponded to a number of places for a -processed- number. Memory capacity equaled 512 numbers, access time – 25 mcs. Notably, this device was a unique one – the only storage in world built of common cathode ray tubes designed for an oscilloscope not for a computer. Special tubes – potentialoscopes were used for the purpose everywhere else.

Computer M-2 was given to regular operation in early 1955; its memory device, made by Tamara Alexandridi, made its main storage it also determined its performance 2000 ops – really high for that time. Three years later its storage was replaced with ferrite core memory.

In 1956 Tamara Alexandridi made report “Electrostatic Memory Device for M-2” at the USSR first scientific computer conference “The Ways of the Soviet Mathematic Machinery and Instrumentation Development”. A year later (in 1957) the book “Fast Computing Machine M-2” was published by the State Publishing house of the Technical Theoretical Literature. T.M. Alexandridi was one of its co-authors, she prepared the chapter “Electrostatic Memory Device”. 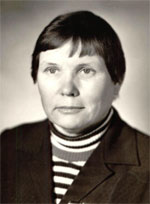 In the same 1957 she began her post-graduate PhD program at the AS USSR Institute of Automatics and Remote Control. Her dissertation for the “Candidate of Technical Sciences” degree (1963), “Multichannel Digital Regulators”, was supervised by famous academician V.A. Trapeznikov (USSR Academy of Sciences). It was one of the first Soviet scientific researches on the subject.

In 1967 Alexandridi received assistant professor position at the Moscow Institute of Road Traffic. In 1981 T.M. Alexandridi founded there the chair Automated Control Systems. In 1985 she was awarded professor degree. Since 1986 Alexandridi headed that chair; at present (2016) she is working at the chair as a professor.