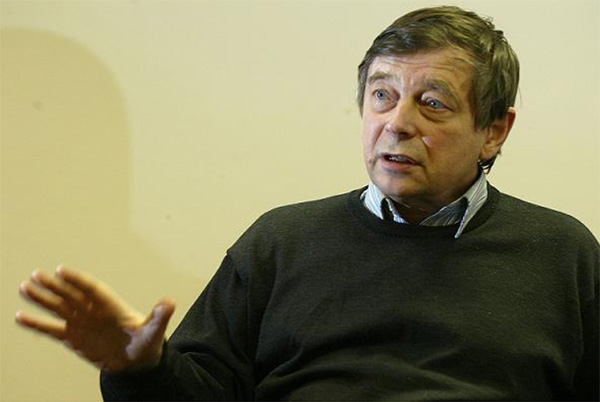 He was also the founding director of information and technology development company “DISKo” and a co-author of the computer chess program “Caissa” — the world's first champion among chess engines (1974).

In 1970 he graduated with degree from the M.V. Lomonosov Moscow State University, faculty of mechanics and mathematics and started his professional career as senior scientific collaborator at the Institute of Management Problems (USSR Academy of Sciences), where he made post-graduation study for higher doctorate and defended dissertation with the degree “Candidate of sciences at Physics and Mathematics” in the field of “Theoretical Cybernetics”.

Donskoy was leading member of development team which produced computer chess program “Caissa”. The interest in chess was not surprising at those times. Creation of chess playing programs was considered to belong to the field of artificial intelligence. Besides that, for rather long time chess programs were used as testing ground for development of decision-making methods. Mikhail Donskoy himself described the “Caissa” history in the following way.

“A well-developed chess engine was ready by 1972. Then, popular daily “Komsomolskaya Pravda” (a very popular Soviet central newspaper) organized a series of games between that program and the readers. A catchy name was needed for that purpose and the paper's chess columnist A. Khenkin proposed (mythological) name “Caissa”1. Order of the “competition” was very simple, each party played one game with black figures and the other game with white ones. Each side made one move a week. The moves were selected statistically by majority of similar proposals. “Caissa” itself was not controlled, but we did not make (any wrong) use of that. A next position of chess figures was published each Sunday in the newspaper, the letters with new ideas were accepted until the next Tuesday and “Caissa” calculated its answers on Thursday night. The whole match lasted almost a year -from January till November- and ended with victory of the “people's team”. The score was 1.5 to 0.5. Thouse ones who remember abnormally hot Moscow summer of 1972, could be a little envious with the “Caissa” authors, they spent a couple of days a week in computer rooms equipped with air conditioners — probably the coolest place of Moscow, then.

The match attracted attention of the whole world's chess fans; I used to know a foreign amateur who specially studied Cyrillic letters and a little of Russian language for to monitor all details of the “championship”. After that we were invited to take part in the world championship 1974.

Beginning with the 1972, annual chess engines' championships of the North America were taking place in the USA and Canada. They were organized by ACM.

The “Caissa match” gave them idea to conduct a world's championship, and it was arranged by the IFIP within the frames of its regular congress” [3].

The first world championship among the chess engines was taking place in Stockholm from the 4th till 8th of August 1974. 12 programs were presented. According to its rules 4 tournaments were played on Swiss system. “Caissa” obtained 100% result and became the first Champion -program- of the World. However, “Caissa” did not play with the best American engine of the time — Chess 4.0. Then a special demonstration game between them was conducted, and the “players” drew. The victory of “Caissa” was eventually justified. One more substantiation that the victory was not a mere coincident was provided by the soon following seminar, which demonstrated unique mathematical methods implemented in “Caissa”.

In the same year the International Federation for Information Processing (IFIP) awarded Mikhail Donskoy its Gold Medal for his contribution to “Caissa” development. Thus, Donskoy became a world-renowned programmer.

Mikhail Donskoy commented, that, “Besides satisfying my creative ambitions, “Caissa” helped me to make many good friends all over the world. Those times, development of good chess program was very difficult thing, so a sort of informal international club of chess engines designers and experts formed by itself them the chess. Many world-famous informatics scientists were among them. They were: C. Shannon (author of the information theory), K. Tompson (author of operational system UNIX), D. Levy, M. Newborn, A. Marsland, B. Mittman, F. Fridel (author of Chess Base) and many others” [4].

From 1982 till 1988 Donskoy was the leading system programmer for the mainframes INES database management system (DMS). He authored Archival System INES installed at many Soviet computer centers, and also developed Automated Management System ISTC (International Scientific-Technological Cooperation) for the USSR State Committee on Science and Technologies, as well as many other applied software products.

In the DMS INES he dealt with system problems – generation and distribution of the system, and the version support system; the Archival System was developed specially for that purpose.

M.V. Donskoy was a student and follower of the famous mathematician Georgy Adelson-Velsky; he worked in the field of artificial intelligence (AI), then solved problems of user interface. He made regular reports and presentations and actively participated in annual Moscow and Leningrad international conferences on man-machine interaction in the beginning of the 1990s.

In 1989–1992 M. Donskoy was member of the board of directors of JV “Paragraph” (Moscow), and headed a department there.

He has written the following about that work. “In the end of the 1980s, when I joined JV “Paragraph”, it looked like a “picked team” of the best programmers of Moscow. That time “Paragraph” had such collaborators as, for example, E. Veselov (the author of programs “Master” and “Lexicon”), A. Chizhov who authored numerous Russian localization program including famous “Beta”. V. Savjuk was selling games – the “Dandy” was especially popular. There were also many other high-class professionals — the team in general was really interesting.”

“At “Paragraph” I had a chess-programming department, our “Caissa” was newly-born there as a program for IBM PC. Although our department revived that software and it made good impression at computer “Olympic-1990” (won the third place), our interests already moved to user interfaces, because, well-developed by that time, graphic environments of MAC and Windows became very attractive.”

“Our department (basic team: A. Dubets, M. Karaev, V. Kokin, I. Shabalin and some others) started development of new graphical editors line. We produced editor for mathematical formulae and, already after my leaving the “Paragraph”, completed editor for fax transmission and produced a new version of “Lexicon”“[4].

In 1992 M. Donskoy with several people from computer programming and computer business field founded Computer Club. During many years its meetings place was an ancient building in historical center of Moscow (Rozhdestvensky Boulevard St.). More than 200 people joined it during several years. Many of them subsequently became leaders of Russian computer business. Donskoy himself was really “the soul” of that club; fading of its activity after his death is not a surprise.

In 1994 he founded computer company “DISCo”(DISCo – Donskoy Interactive Software Company) where he was the director-general. “DISCo” was mainly developing software projects both for Russian and foreign customers. It produced several popular programs for PC, they were fail manager “DISCo Commander”, “DISCo Observer” and “DISCo Rocking tool”, and some more products for internet. Some of their customers were Apple, 3Com, Hewlett-Packard.

In 1999 he was a special guest at the Top Chess Engines Championship in town of Paderborn (Germany). Since 2000 he was a member of “Arsenal” company's board of directors.

He became a laureate of professional inquiries “Top-100 of Russian computer business” and member of the program “Technology Pioneers” at the World Economy Forum 2001, in Davos.

Donskoy was a man of activity; besides his “addiction” to computers he was a passionate gambler. He always played a sport variant of Bridge, and was the USSR champion 1989 with a team “Moscow” (M. Donskoy, V. Arlasarov, M. Rosenblum, T. Zlotov, A. Ladizhensky, A. Babenko). He won several times the first place at the Moscow tournaments, as member of “Gudok” team, at masters' tournaments on sport Bridge 1984 and 1985, also in doubles games of Russia and Moscow, and in Games “Ronishi-84” in partnership with Leonid Orman [5].

I (the author) shared with him interest to the history of Ancient Rome.

He was a legendary person at Russian programming society; his early death became a heavy loss for all its members.

1 Caïssa – a fictional Thracian dryad, portrayed as the goddess of chess, was invented by Italian poet Hieronymus Vida (16th century).

Later, young English orientalist William Jones re-used the idea of a Chess poem in 1763, in his own poem Caïssa Or The Game at Chess. In his poem, Caïssa initially repels the advances of Mars – the god of war. Spurned, Mars seeks the aid of the god Euphron (Jones's invention), brother of Venus, who creates the game of chess as a gift for Mars to win Caïssa's favor.