Composed and translator
by Alexander Nitussov

G.N. Povarov was born on the 2 nd of February 1928 in Moscow, where he lived and worked all his life. Prominent mathematician and cyberneticist G.N. Povarov is also famous for his works on logic, logic machines, early cybernetics, philosophy and history of computer science . 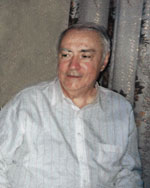 It was Povarov who discovered forgotten name of Semen Korsakov and his punch-card machine “For comparison of ideas” (1832 St Petersburg). He also published several works on “Russian logic machines” and work of their author Prof. Alexander Shchukarev.

After graduation from the faculty of Mechanics and Mathematics at the Moscow State University in 1950, Povarov performed researches on mathematical logic and its engineering applications at the Scientific Research Institute of Automatics and Remote Control (AS USSR). He suggested conception of objective (eventual) logic, in which events themselves replace judgements and statements (“images of events”). He is also author of the theory where communication networks are presented as cumulative networks. It was result of his studying linear connections in various systems with methods of abstract algebra. He contributed to development of soviet cybernetics and supported idea of artificial intelligence (already in early period).

Being in contact with admiral Aksel Ivanovich Berg (then vice-minister USSR of defence), he translated, edited and published all first Soviet editions of N. Winer's “Cybernetics” (1958-68) , and practically saved its first publication by writing special “very diplomatic” introduction. Director of “Radio” publishing house, who was in charge of it, was so scared with the order of A.I. Berg to “immediately print the book” that he could try to stop the work.

Povarov translated and published little known materials on A.M. Ampere's works on cybernetics and systematisation of sciences (Ampere and Cybernetics).

In parallel he always taught at universities. He received his doctorate in 1965 and was appointed a professor at cybernetics department of the Moscow Institute of Engineering Physics (MIEP). Povarov is also a pioneer of scientific futurology and a member of International Academy of Informatics.

Being “typical scientist of old school”, with unbelievably rich erudition and knowledge of foreign languages, he was always modest, polite and full of respect to everybody. One could hardly imagine him saying something negative, insulting or unjust. Although Povarov was a man of high moral values and firm principles and never avoided arguments he also had a rare ability of friendly analysis instead of direct criticising his opponents. As for his style of work… all his colleagues knew that every written word or date published by him were proved several times, thus the reason “Povarov said so” alone was guarantee of authenticity.

G.N. Povarov worked until his last day. He died in November 2004 returning after a lecture at MIEP.