М-3 belonged to “small type” computers. It was designed by the team of young engineers under scientific guidance of academician I.S. Bruk at the Laboratory of electrical systems[1] of the Power Institute of the USSR Academy of Sciences (PI AS USSR).

In 1957-1958 the first computers M-3 were produced at the Scientific Research Institute of Electrotechnical Industry (SRIEI)[2] by its designers from I.S. Bruk's laboratory, upon their technical documentation. The director of SRIEI academician A.G. Iosifyan offered the project essential practical assistance.

Nikolay Matyukhin (then 26), a recent graduate from the Moscow Power Engineering Institute, headed the designing team.

The very first computer M-3 remained at the A.G. Iosifyan's SRIEI, one more was given to the design bureau of academician S.P. Korolev (space researches) and the third one sent to the Erevan Institute of Mathematics[3] (AS Armenian SSR) to its director academician Sergey Mergelyan[4] (then 30).

In Erevan M-3 became the prototype for computers ARAGATS and RAZDAN.

One more M-3 was assembled at the Moscow institute of academician V.A. Trapesnikov (systems of automatics).

Technical documentation for M-3 was given to Hungarian Academy of Sciences; it was assembled in Budapest. That was the first Hungarian electronic computer.

It was also assembled at the telephone plant in Peking (under supervising of G.P. Lopato) and, correspondingly, became the first Chinese computer.

M-3 formed technical basic for the following development of the scientific school of control computers, at the (Moscow) All-Union Scientific Research Institute of Electronic Computers, founded by B.M. Kagan, V.M. Dolkart and many other young members of I.S. Bruk's “M-3 team”.

Differently to bigger machines, such as “Strela” and BESM, which needed considerable investments for their maintenance and special conditions for their stable operation (large premises, large power supply installations, cooling systems, etc.) M-3 was realization of I.S. Bruk's idea of “small computing machine”.

M-3 system of number representation – binary with fixed point: 30 binary places (in absolute value < 1) and a digit for number's sign.

Instruction codes were presented with two octal digits in the way that demonstrated the basic attribute – the kind of arithmetic operation, and additional attributes indicating the variant of operation performing.

Two of those variants were reserved for operations with modules of numbers. Other variants used possibilities of performed operation result storing in the arithmetic unit of the computer. Then it was used as an operand for the next operation. That was actually realization of the one-address operation mode, what reduced amount of memory accesses.

Semiconductor components were widely used in M-3. Mismatched decoder was the main logical element of the computer. It was used in most of its arithmetical and control circuits.

Control device registers (of program decoder) of arithmetic unit were: information reception triggers (flip-flops) and valves made on electron tubes.

M-3 had altogether 774 electron valves, including 43 in power supply sources/devices. Power supply was provided from three-phase network of alternating current. Admissible voltage fluctuations: from minus 5% up to plus 10% . M-3 power consumption – 10 kWt.

There was also the table with a teletype used as perforated tape input-output device. That also provided possibility for computer operation remote control via telephone and/or telegraph communication lines.

Electronic circuits of M-3 were made as removable two tubes sub-blocks provided with 20 or 14 contacts plug-in connectors.

Autonomous power supply system could be also installed in a separate room. It consisted of three phase asynchronous motor and alternating and direct current generators. 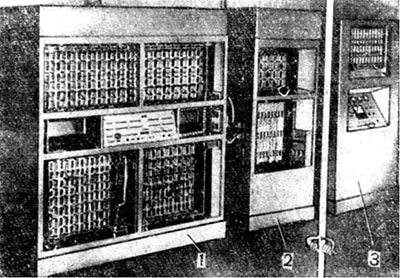 Computer М-3 was built according to I.S. Bruk's concept of “small-size computer”. It made possible to widely use M-3 at research organizations and design bureaus without arranging special conditions or rooms. For comparison: the next in size computer URAL needed 60 sqm against 3.2 sqm of M-3.

Asynchronous principle of control device operation was implemented in M-3. Differently to synchronous principle of control, the sequence of М-3 single units and blocks operation was defined with their intercommunication mode – “order – response”. Transfer to the next primitive action was only allowed after receiving signal of the previous operation completion. Such design provided essential operational independence of different computer units. That also notably simplified its testing, adjustments and operation. Thus, in case of a failure in some block or device the computer automatically stopped, what simplified locating of the defective device or failed unit.

Detailed biographies of the persons mentioned here can be found at:

4. Mathematician S.N. Mergelyan became the youngest Soviet academician – at the age of 25.