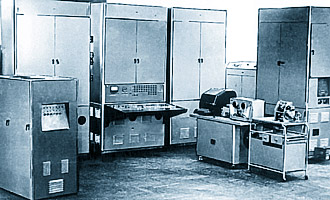 Application field: Computer «Minsk-1» was one of the first soviet serial small machines with electron valves; which was most widely used for solving of scientific and engineering problems, for operation at scientific research institutes and universities, computer centers, design bureaus and at industrial enterprises.

Description of the computer
(structure and architecture, including peripheral devices)

Common plastic materials were used, as well as traditional  methods of processing and assembly. New technologies were assembly and control of ferrite devices, testing and adjustment of bot the whole computer and its single units.

Distinguishing features of the computer