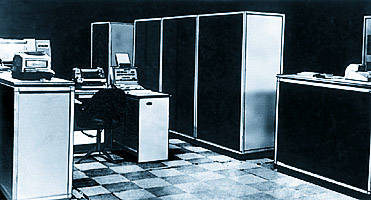 Description of the Computer (structure, architecture including peripheral units)

Unit construction of the computer allowed to assemble different configurations. The 37-places long word and the 7-places long symbol were used in “Minsk-32” as informational units. The word was used for storing of the command and operational information, the symbol — for the work with fields of variable length and processing of information arrays of the peripheral devices.

Number of progressive technological processes was implemented. That was the first time in electronic production practice, when assembly of a computer was performed on a conveyor assembly line. Bench maintenance equipment was widely used for assembly quality control: wire identification station for assembled units, which was designed at the plant's own automation and mechanisation department. Implementation of the designed bench equipment allowed changing of the complex computer testing for single units control and adjustment; the complex (integral) control was performed only at each tenth computer for general technological process performance control.

Synthetic materials and section-shaped constructions, as well as foundry casting works and press forming were widely used. As the result production of framed structures came into flow-line  production. That was also the first successful implementation of magnetic reading heads manufacturing technology. Implementation of new technologies and development of technological constructions enabled flow-line production and made possible manufacturing of large series.

ССК and macros, COBOL, FORTRAN with debuggers, autocode AKI, the first implementation of multiprogramming mode in operational systems of the small computers, the first hard-and-soft compatibility system supporting compatibility on  machine programs/software level and possibility of using and processing MINSK-22 software on computer MINSK-32 what sufficiently accelerated implementation of the new model and beginning of its usage in the national economy.

Specific features of the computer

Big capacity of operational memory (up to 65536 words of 37-decimal places); multiprogram operation possibility; two communication channels could provide simultaneous connection with 136 peripheral devices, based on universal principles; “Minsk-32” had a fast channel providing possibility to connect external memory devices, such as: magnetic tapes, magnetic drums and magnetic discs; there was possibility of the central logic unit and peripheral devices - fast and slow channels, simultaneous operation; compatibility with computer “Minsk-22M” - “Minsk-32 could  process and perform all programs of “Minsk-22M” and the autocode ACI based programs for “Minsk-2” and “Minsk-22” without additional re-programming; addressing possibility for each alpha-numerical symbol in the computer memory, what enabled organization of character-oriented information processing; possibility of computation in decimal system; hard-and-soft time service;  two computers collaboration possibility. That time those possibilities of “Minsk-32” were new and implemented first time; they were protected with numerous author's certificates (Soviet analogue of patents).