Peripheral devices of the computer: printer and perforator/puncher, which automatically bring computation results out onto paper roll or perforated tape.

Input information is preliminary prepared at peripheral devices: key-input, perforator and control-reading ones. These devices operate independently of the computer. 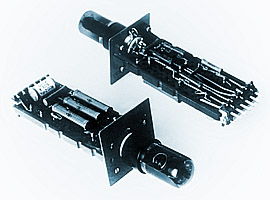 The computer performs its working cycle automatically independently of the solved problem kind or complexity.

Rack cabinets. Five cabinets of the computer main section were filled with electron valve cells in their upper parts and with power supply blocks in lower parts.

Magnetic tape and perforated tape storage devices are mounted in lower parts of the middle rack cabinets, on the left and on the right hands of operator’s chair.

Traditional technologies of mechanic parts processing, synthetic materials processing and assembly. Principle novelties were introduced into testing and adjustment both of the whole computer and its single parts.

Specific features of the computer

Differently to bigger machines, chiefly used by large computer centres, URAL-1 was the first computer to be widely implemented by relatively small enterprises. It also became a “primary school” for numerous designers, mathematicians-programmers and maintenance specialists.

1. (Here and further on) the USSR notion „serial production“ basically is the same as „commercial production“ in the West, however, those times computers in the USSR were sold (or rather distributed by responsible governmental planning administration) only among the official organisations but not into private hands (A.N.)