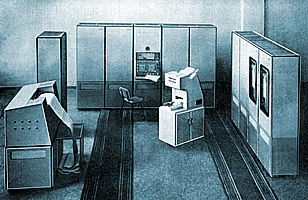 URAL-14 was an intermediate model of the URAL computer line. URAL-14 operated with both fixed- and floating-point numbers and also with alphanumeric symbols and bit-signals lines of variable length. Length of addressed word was 24 bits and length of information array directly addressed to RAM – 24, 48, 72, …, 98 304 bit.

One-address instructions (same as at other computers of the line). Binary and binary-decimal arithmetic. RAM capacity – 16 384 to 65 536 24-bit words.

Central processor unit of the computer consisted of arithmetic unit U-320 and separate control unit U-321. Device U-320 performed arithmetic and logical operations with numbers and words of variable length from 1 to 24 bits. The device processed only fixed-point numbers. Decimal numbers, 48-bit binary numbers and floating point operations were processed by additional arithmetic devices U-342 and U-345. Depending on number of arithmetic devices and configuration of their set, of RAM and peripheral devices, several various models of URAL-14 were produced. They all had two-input magnetic drum storages, also magnetic tape storages, punched-tape and punched-card devices and alphanumeric printers.

Computers URAL-11 – URAL-16 were based on unified complex of logic elements URAL-10. The element consisted of a set of semiconductor circuitry modules. There were 5 types of basic general-purpose modules and 10 special ones (for storages and peripheral devices). 90% of URAL-14 electron circuitry consisted of diode-transistor modules of two types, which were able to operate within temperature range: –10°C to +70°C. The modules were placed on the sells with soldered plug-socket connection.

Computers of URAL-11 – URAL-16 family were produced according to the same standard. Electron components were placed within standard cabinets. There were boards with diode-transistor components mounted in cells. Modules, cells and some contact connections on the boards were produced upon implementation of printing technologies. Storages and peripheral devices were common for all URAL computers.

Traditional technologies of mechanic and plastic parts processing were implemented. Cabinet frames were welded. Cells and modules, first time in URAL computers development produced with printed wiring, were made of foiled dielectric. Their serial production was performed at special plant. Manufacturing technology of ferrite memory storage and peripheral devices, as well as of magnetic tape memory and alphanumeric printers, was new for the Penza plant.

The computer was also provided with special automatic code ARMU (Russ. abbr. for Automatic-code Row (line) of Machines URAL (URAL computers)). That was a unified auto-code for all computers of the URAL line. It was composed upon consideration of their specific features and fully maintained compatibility of junior models to senior ones. However, each model of URAL had its own translator from ARMU language to its internal machine language; therefore, the compatibility of URAL computers remained limited and existed only on the ARMU auto-code level.

Besides testing programs, library of programs and debugging program for the ARMU language special translator from ALGAMS language to ARMU was supplied with it.

URAL-14 was an intermediate model of the URAL computer line. Same as the other computers of the family URAL-14 was produced on unified component and technology basis of URAL-10. That was the USSR first experience in designing not a single computer but an extended line of compatible computing machines and appliances. Their technical unity was the focus of designers’ attention. Most of their technical, structural and designing solutions were undoubtedly promising ones, however, volume of their real production was rather limited. Besides, implementation of separate devices for operating with decimal arithmetic and 48-bit operations with floating point essentially raised URAL-14’s price.