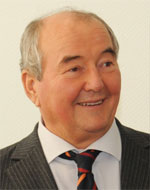 Professor Valery Sergeevich Mukhtarulin was a highly competent expert in the field of digital computer research and design. From 1992 until Sept. 2014 he was the chief designer and also the director-general of the M.A. Kartsev Scientific Research Institute of Computing Complexes (SRICC).

V.S. Mukhtarulin has been awarded the orders “Badge of Honour”, “Friendship of Peoples” and “For Military Merits”.

Valery Mukhtarulin was born on the 8th of February 1942 into family of a military officer. That was in settlement Verkh-Chita, in the administrative area of town Chita, South-East Siberia. In 1967 he graduated from the (huge) technical university – Moscow Power Engineering Institute (MPEI).

After graduation he served two years in the army (as an officer). From 1969 till 1984 he worked at the electromechanical plant in town Zagorsk (ЗЭМЗ), Moscow area. He began his career there as an adjustment engineer and eventually grew up to the chief engineer of special design bureau. He accumulated practical experience in design of digital computers – then, absolutely new means of computations and information processing.

While working there Mukhtarulin participated in technical and organisatonal preparations for production of multiprocessor vector supercomputers and computing systems. They were made for real time information processing, for strategic space, anti-missile and antiaircraft defense systems and the ballistic missile early warning systems. He also took part in development of manufacturing (technological) equipment, in testing and in both experimental and combat operation of computing complexes, designed for needs of the USSR Ministry of Defense.

In 1984 Mukhtarulin received position at the USSR Ministry of Radio Industry, where he had begun his career as the vice-chief of the 11th Main Office (one of subdivisions) and eventually grew to a deputy minister rank, in 1990-1991.

At the ministry he (among other) headed and simultaneously personally participated (as scientific expert) in working out the program of supercomputer ELBRUS (Эльбрус) development.

Mukhtarulin also was engaged in development of serial production technologies for the USSR first personal computers (Агат, ЕС-1845). They were implemented at the computer plants in the towns of Volzhsky (20 kilometers /12 mi northeast of Volgograd), Kishinev (Moldavia), at the Brest computer plant (Брестский завод) in Byelorussia, at the computer plant of Baku (Azerbaijan) and at the Lianozovo plant (a district of Moscow). The PC serial production has been successfully launched in all those places.

In the years 1990-1992 he was a vice-president of research and production corporation “Radiocomplex”.

In 1992 he was appointed as the director of the (Moscow) Scientific Research Institute of Computational Complexes (SRICC).

During the hard times of the 1990s, with rebuilding of the whole Russian society and the state, with long-time depression, lack of both administrative -former level- interest to scientific progress and with permanent shortages of financial support, Valery Sergeevich Mukhtarulin managed not only to save the institute's accumulated scientific potential but also to develop it by exploring new fields of actual scientific activity.

The institute was named after its founder Mikhail Kartsev.

At the M.A. Kartsev SRICC the following important development projects have been performed under Muchtarulin's scientific guidance and personal participation:

V.S. Mukhtarulin paid much attention to problems of young specialists. Thus, among others, a Council of Young Specialists had been founded at the institute and the annual M.A. Kartsev premium for scientific achievements for young scientists was established .

The institute's scientific council works regularly according to its schedule.

A post-graduate department was established, for development the institute's “scientific body” and stable increasing its potential. Also a computer department – a branch of the Moscow University of Radio and Electronics was established at the SRICC for young computer specialists' training.

There is also special educational training centre for contemporary informational technologies at the institute.

The “M.A.Kartsev Medal” is regularly given to some collaborators for outstanding scientific contribution and achievements.

As a director, Mukhtarulin initiated regular participation of his institute both in national and international professional thematic exhibitions.

His -scarce- free time Valery Mukhtarulin willingly was spending in his garden or at the nature – fishing, hunting and picking mushrooms.

He was married and lived together with his wife Nina Mikhailovna more then 50 years.

His son Sergey Valerievich Mukhtarulin is a collaborator of the SRICC, the daughter Svetlana is medical scientist, she has a Doctor of Medical Sciences degree.

V.S. Mukhtarulin died on the 22nd of September 2014 and is buried, not far from Moscow in town of Zagorsk, together with his father.