Mikhail Romanovich Shura-Bura is rightfully recognised as the patriarch of computer programming in the Soviet Union . His scientific biography includes all the vital stages of system- and applied- programming progress not only in M.V. Keldysh Institute of Applied Mathematics - IAM, which he heads, but also in the entire nation. 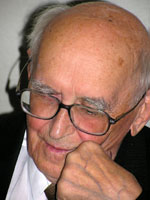 M .R. Shura-Bura was born on the 21 st of October 1918 in the village of Parafievka near Chernigov in Ukraine . In 1940 he graduated from the Department of Mathematics and Physics of the Moscow State University (MSU). Between 1940 and1947 he taught mathematics at the Artillery Engineering Academy (1940-1947) and the Moscow Institute of Physics and Technology (1947-1955). His predominant mathematical works during that time were related to the theory of Bicompact Spaces .

Devoting almost 50 years working at the same institute is a rare example of scientific stability and loyalty. In the beginning his main concern, as well as organisational success, was the development of a new programming department. The graduates of the computation mathematics department of the MSU, V.S. Shtarkman, E.Z. Lyubimskiy, I.B. Zadykhailo and others formed the core of a new team.

Their first results emanated from intensive work between 1953 and 1955. These were formidable programs for calculating energy of nuclear explosions, necessary for modelling of atomic weapons with the computer “Strela”. Algorithms and methods of operation were prepared by departments headed by mathematicians A.N. Tikhonov, A.A. Samarskiy and I.M. Gelfand. Programming of such complex problems in machine codes for computers with RAM of only 1000 cells was a task for a programmer virtuoso. Additionally, the computer had a defective magnetic tape memory device and was affected by frequent faults in arithmetical and controlling systems. It was a real challenge which needed great flexibility and “tricky work” of everybody involved. It is no wonder that M.R. Shura-Bura named that work, “How we overcame STRELA”.

In 1954 he successfully submitted another dissertation thesis and was awarded the degree “Doctor of Physical and Mathematical Sciences”. In 1955 he was awarded the USSR State Premium for notable contribution to creation of Soviet atomic weapons.

In the mid-1950-s the department of programming was utilized by M.V. Keldysh in calculations of the artificial satellites motion trajectories. Programs produced by M . R Shura-Bura's department for the computer “Strela”, and later for M-20 maintain constant (24 hours a day) processing of the trajectories measuring data. Those programs were in use from 1957, during the launch of the first Soviet satellites, during the flight of Yuri Gagarin and also during the following 10 years. The importance of that work is difficult to underestimate, especially considering that calculations for trajectories performed by other organisations often didn't coincide. Of course that was unacceptable. Therefore the more respect was deserved for the exceptional performance of M . R . Shura-Bura's team. After programming for the first space flights the department developed a system and applied software for the space-shuttle “Buran”. Until the present time he is in charge of various projects on the design of applied diagnostics systems for large technical complexes in various defense organizations.

Generally speaking both the Institute of Applied Mathematics and personally M.R. Shura-Bura had been a huge influence on the choice of architecture for some Soviet universal computers. Thus in 1955, during the development stage of the computer M-20 three main designers made basic fundamental decisions. S.A. Lebedev (general characteristics of the computer and its structure), M.R. Shura-Bura (instruction codes) and P.P. Golovistikov (circuitry). Many of the principle architectural solutions were made by M.R. Shura-Bura, among them there were:

Those architectural solutions of the M-20 (the first generation) remained the same in subsequent computers M-220 and M-222 already based on semiconductor components. These computers were the “work horses” (main working power) for many scientific and applied engineering calculations at numerous research and design centres and many defence organisations.

M.R. Shura-Bura took the most active part in the creation of software for that family of computers. First it was in interpretation of system IS-2 and library of standard programs for M-20, they were followed by operating systems OS 4.220 and OS DM-222, and then compilers for the languages ALGOL-60 (compiler TA-2) and FORTRAN were produced.

The M-20 family with its “handy programming[2]” became very popular among “common” civil users which initiated the spontaneous forming of a public association - “Association of M-20 users”. That was the first –purely public- voluntary organisation of its type in the USSR . Activity of the “Association”, which was collecting and distributing applied software for M-20, M-220, M-222, was also essentially influenced by M.R. Shura-Bura.

In the mid-1960-s when the Institute of Precession Mechanics and Computer Engineering headed by S.A. Lebedev was busy developing architectural solutions for the universal computer BESM-6 (the second generation) M.R. Shura-Bura participated in various working meetings where those problems were discussed. Later, his department was involved in the development of the software for BESM-6. Operating system OS IPM [3] was the most important product of their work. The project OS IPM was headed by I.B. Zadykhailo.

A new problem arose by the end of the 1960-s, computers of the third generation needed architecture which would make them compatible on software level. Those were computer s of new family ES Electronic Computers (full name – Unified Series of Electronic Computers) which fulfilled that demand.

The history of that project was all but a simple one. Decision to produce ES computers resulted in an unprecedented international joint work on common computer production which successfully lasted about 20 years under scientific guidance of the USSR , GDR[4] and other countries of East Europe . On the other hand it caused notable difficulties for some national projects because of contradictions in their basic conceptions.

The basic idea of M.R. Shura-Bura, who was a person of influence not only in the IAP but also in the Academy of Sciences , consisted in producing a computer compatible on software level with IBM-360 which dominated the Western market. To study IBM-360 architecture and software his department (personally V.S. Shtarkman) ran a number of seminars for specialists of many concerned organisations. M.R. Shura-Bura himself headed scientific work on development of the software for ES computers. In 1978 he and other colleagues were awarded the USSR State Premium.

In the 1980-s his department took part in designing of original architecture of scalar-vector multiprocessor computer ES-1191 which was produced according to technical demands presented by leading physicists Y.B. Khariton, A.N. Tikhonov and V.S. Semenikhin. Assembler and operating system for ES-1191 were made by collaborators of M.R. Shura-Bura I.B. Zadykhailo, V.A. Kryukov, V.S. Shtarkman and Stepanov. However the computer did not come into mass-production because of the rigorous demands to implementation of only USSR own-production electronic components, which in fact were lower in quality than contemporary western analogues. Nevertheless its programming part was of the highest level.

One more notable contribution of his department into development of operating systems was related to computer “Vesna”[5] produced in the first half of the 1960-s. Operating system for “Vesna” was worked out by V.S. Shtarkman. That was the first soviet operating system with full set of functions for serially produced computer, which supported multiprogram working mode, batch processing and time sharing operation mode. It was followed by OS IAM for BESM-6, authored by I.B. Zadykhailo, and other abovementioned operating systems.

In 1963 M .R. Shura-Bura headed successful development one of the three translators from programming language ALGOL-60 for computer M-20, that was TA-2 with full version of ALGOL-60. TA-2 was followed by programming systems for BESM-6 and other computers. Conception of integrated programming systems based on common intermediate language ALMO (ALgoritmic Machine Orientated) and pre-compilers for several input languages was proposed and developed by E.Z. Lyubimskiy and S.S. Kamynin.

In the 1980-s new language REFAL became the system programming tool for compiler development at the IAM. Language REFAL and its applications were worked-out by V.F. Turchin, then M.R. Shura-Bura's collaborator. REFAL technology was implemented at creation of FORTRAN compilers for computers PS-3000, ES-1191, scaling compiler of on-board software module for space shuttle “Buran”, software for special computers “Bulat- 2”, “Bulat- 3” (similar to STARAN). REFAL technology was in demand until 1993, that is before the depression in the Soviet computer progress. Some works on REFAL are still going on at the IAM.

Creation and development of applications for declarative programming language NORMA was one more field of his department's activity. Here I.B. Zadykhailo was in charge of solving the problem of high level synthesis in design of applied programs.

Researches in the theory of computation complexity and logical programs became very famous. Many results in that field obtained at the IAM formed theoretical basis for creation big instrumental systems for logical programming. Among them there was popular system “GESIOD” which conducted synthesis of logical programs on basis of their operating prototypes.

M.R. Shura-Bura has always been paying particular attention to the educating of young specialists. He personally taught several generations of the highest level programmers. Between 1955 and 1970 he was Professor at the Department of Computation Mathematics, faculty of mechanics and mathematics of the MSU. Academician Sergey Sobolev[7] was its chief. From 1970 to 1991 M .R. Shura-Bura lead the Department of System Programming at the Faculty of Computational Mathematics and Cybernetics of the MSU and at the same time held a Professorship there. The department had been founded by academician A.N. Tikhonov[8]. The first Soviet text book on programming, “Programming for Electronic Calculating Machines” was written by M.R. Shura-Bura in 1952, in co-operation with L.A. Lyusternik, A.A. Abramov, V.I. Shestakov [9].

M.R. Shura-Bura has been leading the regular Moscow seminar on programming for more than 30 years. This seminar is the most influential scientific enterprise for contemporary Russian programmers. Few dissertations on programming for doctorate degrees have been not reviewed at this seminar. He was a scientific supervisor on 30 dissertations for “candidate of sciences” degrees and for 8 doctoral theses.

Since the appearance of the first Soviet electronic computers M.R. Shura-Bura has reported at the all-union ( USSR ) conferences and congresses on basic problems of programming. For example he participated in the following principal ones:

More information on scientific achievements of M.R. Shura-Bura is accessible in his big review, “Emerging and Development of programming in the USSR ”, which he A.P. Ershov prepared as report for international conference in Los-Alamos in 1977. Later it was published, in English language, in famous book -collection of works- by Nicolas Metropolis, Jino Rota (et al.), “A History of Computing in the Twentieth Century” (Ac.

1. More on V.A. Steklov and his institute see in biography of Israel Yakovlevich Akushskiy -www.computer-museum.ru

2. Naturally for that time.

4. In GDR – one of the most important participants of the ES project, the computer family was named ESER – “Einheitliche System Elektronischer Rechenmaschinen”.

5. More about computer “Vesna” in biography of V.K. Levin, under - www.computer-museum.ru

9. V.I. Shestakov expert in mathematics and in engineering and computational logic, famous for his discoveries in the field of applicability of binary logic in technical systems (in fact the idea of famous physisist Paul Ehrenfest). Shestakov in Moscow (1935-37), Claude Shannon in USA (1937-38) and Nakasima and Khandzava in Tokyo made that discovery simultaneously, knowing nothing of each other's work